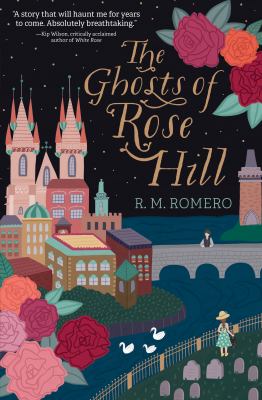 The Ghosts of Rose Hill

“Sent to stay with her aunt in Prague and witness the humble life of an artist, Ilana Lopez–a biracial Jewish girl–finds herself torn between her dream of becoming a violinist and her immigrant parents’ desire for her to pursue a more stable career. When she discovers a forgotten Jewish cemetery behind her aunt’s cottage, she meets the ghost of a kindhearted boy named Benjamin, who died over a century ago. As Ilana restores Benjamin’s grave, he introduces her to the enchanted side of Prague, where ghosts walk the streets and their kisses have warmth. But Benjamin isn’t the only one interested in Ilana. Rudolph Wassermann, a man with no shadow, has become fascinated with her and the music she plays. He offers to share his magic, so Ilana can be with Benjamin and pursue her passion for violin. But after Ilana discovers the truth about Wassermann and how Benjamin became bound to the city, she resolves to save the boy she loves, even if it means losing him-forever.” — Provided by publisher. Unrated. Commercial audiobook. For senior high and older readers. 2022.